Action Fraud has received 139 crime reports relating to fake text messages purporting to be from the UK government. The texts state that the recipient is “owed” or “eligible” for an energy bill discount as part of the Energy Bill Support Scheme. The links in the emails lead to genuine-looking websites that are designed to steal your personal and financial information.

How to protect yourself

Energy Bill Discount : £400 off energy bills for households in Great Britain from October 2022. You do not need to apply for the scheme and you will not be asked for your bank details.

Spotted a suspicious text message? Forward it to 7726 (it’s free of charge). If you forward a text to 7726, your provider can investigate the origin of the text and arrange to block or ban the sender, if it’s found to be malicious.

For more information on how to stay secure online, please visit www.cyberaware.gov.uk

Police are asking everyone to be vigilant against sextortion/blackmail scams after seeing an increase in reports.

Sextortion refers to when people send each other sexually explicit photos or videos and one of the parties threatens to share the content unless the other person pays them money, they may also threaten to share images with family and friends unless a fee is paid and ask for a set amount of money.

Even if you have mutual friends do not trust these people and please protect yourselves by not sharing images. This is taking place on all social media platforms anddating websites.

Do NOT pay any money, as the offender may request further payment. 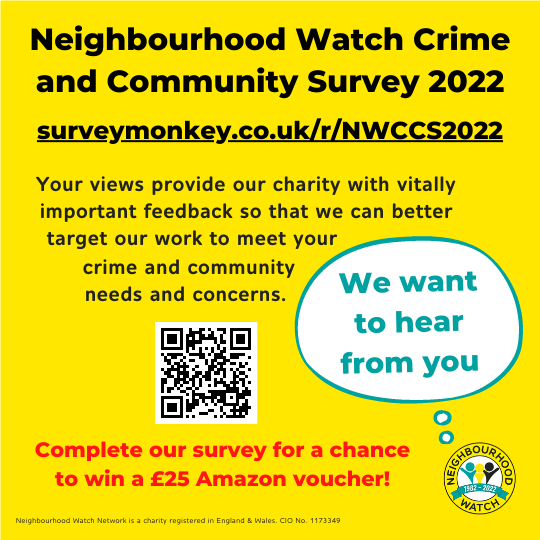 All responses will be anonymised and aggregated, and everyone who completes the 5 – 10 minute survey can choose to opt-in to the prize draw to win one of four £25 Amazon vouchers.

The results will enable us as a charity to better understand crime and fear of crime, benchmark whether membership in a Neighbourhood Watch scheme or living in a Neighbourhood Watch area impacts crime levels, neighbourliness, and the willingness of communities to work together. This information is vitally important to ensure we can better target our work to meet your crime and community needs and concerns.

Last year our survey received 16,000 responses from across England and Wales, providing us with rich and useful data. This year we will be able to compare our data to the last two year’s results and share our findings with you.

Police are warning residents in Devon to be vigilant following a phone scam in which the caller is pretending to be a police officer.

Officers are currently investigating reports of a scam, one of which led to a woman in her 70s drawing out a substantial amount of money, but thankfully did not hand this over and instead contacted the police.

Another report has been received whereby an elderly man handed over £10,000.

Detectives say they have had an increased number of calls about this scam over the past week - particularly in the South Devon and Tiverton areas.

Detective Inspector Jo Devonshire said: “We are advising anyone who receives such a call not to give any personal information and hang up immediately.

“This type of call can be linked to courier fraud, where victims will be encouraged to withdraw funds from their bank account or give bank cards to a courier, arranged by the ‘police officer’ making the call under the guise of ‘assisting with a police investigation’.

“We will never contact people to ask for banking information or request that they withdraw money from an account to aid an investigation.”

She went on to say: “Fraudsters often target geographical areas where they know elderly or vulnerable people live, so we are asking that if you have family or friends who are vulnerable in any way, that you make them aware of this scam.”

If you have any information that could help the police with their enquiries or know someone who has received a call of this nature, please email 101@dc.police.uk or call 101, quoting 518 200922.

Police advise on receiving a scam call of this nature to terminate the call, wait five minutes and ensure you can hear a dial tone before calling 101, and then call your bank using the number found on the back of your card. All reports of this nature also need to be reported to Action Fraud 0300 123 2040 or online actionfraud.police.uk

The Town Council would like to see new and additional activities, ideally with a strong youth work element to help support young people’s mental and social wellbeing, as well as provide a fun activity for them to take part in.

The Council is looking to find as wide range of activities as possible.

To download more details and the application form visit: